San Francisco-based startup Binded on Thursday launched its new, blockchain-based platform to allow artists to register their authorship of their works at the moment of creation. It also announced a $950,000 fundraising round led by Mistletoe, Asahi Shimbun, and Vectr Ventures, bringing its total fundraising to 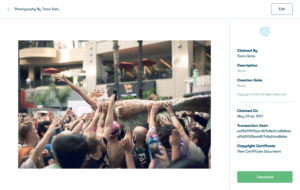 Formerly known as Blockai, Binded allows artists to upload images to their private “copyright vault,” where it’s given a unique fingerprint identifying them as the author. That information is then saved permanent on the Bitcoin blockchain. The artist then receives a digital certificate with proof of authorship.

END_OF_DOCUMENT_TOKEN_TO_BE_REPLACED

Blockai is supposed to help photographers and artists defend their intellectual property. Now it’s launching a new feature to make that process easier — or at least better-integrated with Twitter.

Previously, Blockai users would go to the startup’s website to upload their work, creating a record in a public database (namely, the blockchain) stating that they’re the creator. However, CEO Nathan Lands said, “We don’t imagine artists are sitting on Blockai all day,” so it’s also trying to integrate with other tools, starting with Twitter.

The internet has changed almost everything. But it hasn’t changed copyright. In fact, it’s made it more difficult for artists to protect their work by making it free and instant to copy. The technology companies that could help artists, were built upon economic models that deter them from doing so.

It is crazy to think that with all the web has to offer, there is no simple way to identify the copyright ownership for files on the web. No way to respect the creators or determine how to pay a license or royalty. No way for you to know when your copyright was violated.

Apple Music this week tapped rights-tech developer Dubset Media to manage clearances and royalty payments for DJ mixes and other mashups, opening the way for thousands of hours of user-generated content to be made available legally on the streaming service.

The deal, which relies on Dubset’s proprietary technology for identifying the individual tracks used in extended mixes and making payments to the appropriate rights owners, marks a milestone for electronic dance music (EDM) and other types of derivative work, such as DJ mixes and remixes, which have become hugely popular with music fans but until now have largely been kept off the major streaming services due to the difficulty and complexity of clearing the rights for the dozens of tracks they typically include.

Instead, most EDM and DJ mixes wound up on platforms like SoundCloud, which until recently had no licensing deals in place with music labels or publishers, or on underground streaming services that are less particular about copyrights.

“Our genre has grown hand in hand with the rapid growth of streaming and digital services yet, despite billions of online plays, most of our creators and rights-holders earn very little for their efforts compared to their ‘pop’ peers,” Association of Electronic Music CEO Mark Lawrence told Music Business Worldwide in response to the Dubset announcement. “This is the first move to correct the imbalance.”

END_OF_DOCUMENT_TOKEN_TO_BE_REPLACED

ost of the discussions around blockchain have focused on its potential use in finance, startup Blockai is looking at something different — helping artists, photographers and other creators register their work so that they can protect it from potential copyright infringement.

CEO Nathan Lands is pitching this as an intermediate step between registering your work with the Library of Congress and doing nothing. Technically, your work is copyrighted as soon as you create the novel, drawing or whatever. However, registration is required if you want to sue someone for infringement.