Facebook last week snared long-time music industry attorney Tamara Hrivnak to head up its global music strategy and business development, luring her away from YouTube, where she had served as director of music partnerships.

The hire, which comes just weeks after reports surfaced that Facebook is moving forward with the development of its Rights Manager tool for identifying infringing content on its platform and had begun preliminary discussions with the major record labels and music publishers about securing licenses to host music on the site, further raised expectations that the giant social media network is gearing up for a major push in music.

“Music is important and it matters – it connects us and binds us to times, places, feelings and friends,” Hrivnak said in a statement announcing her hire. “My career has been dedicated to growing opportunities for music in the digital landscape.”

That’s music to the ears of rights owners and distributors, who see in Facebook both a serious and growing problem of copyright infringement, but also a potentially major opportunity.

At a RightsTech panel on user-generated content platforms during the Digital Entertainment World conference last week, speakers representing multichannel networks, rights-management providers, and distributors were unanimous in identifying Facebook’s apparent moves into content licensing as the most important development to watch in the UGC space over the next year.

Ever since Facebook moved video front and center in users’ news feed it has become a popular destination for music videos, particularly user-created covers and lip-dubs of popular songs. None of the current is currently licensed, however, and so generates no revenue for the original rights owners.

The site has increasingly come under criticism from rights owners for failing to adequately address the growing amount of infringing content it hosts. Facebook also generates huge numbers of share-driven views of licensed content scraped from YouTube and other outlets without compensation to rights owners.

“With views in the millions, it’s time for Facebook to answer songwriters’ friend request and properly license their platform,” National Music Publishers Association president David Isrealite wrote in a Billboard op-ed in October.  “Otherwise, it may find itself de-friended by the music industry.”

The reports that Facebook is developing a more robust version of Rights Manager, and the hiring of Hrivak were sign as responses, at least in part, to such criticism.

But Isrealite’s op-ed also hinted, perhaps unintentionally, at the potential scale of the opportunity Facebook presents to rights owners if currently infringing content can be brought within the purview of licenses.

“[W]hile we don’t know the full extent of what is posted, we do know that engagement and viewership on Facebook often outpaces other social media video platforms.,” Isrealite wrote. “In fact, in a recent study of the popularity of copies of Adele’s music videos, of the 60,055 copies of ‘Hello’ found that while ‘Facebook had only 64 percent of the number of copies published to YouTube, Facebook still garnered over two times more video views than YouTube. On average, Facebook racked up 73,083 views per video, whereas each YouTube amassed an average of 23,095 views per video.'”

Currently the most widely used streaming platform for music, YouTube has emerged as the bête noire of music rights owners over what many view as paltry royalty payouts relative to the volume of usage it attracts. Apart from complaining about it, however, rights owners have so far had little practical impact on YouTube’s policies up to now, largely because they have lacked the leverage of an alternative.

Few other platforms have the scale to mount a serious challenge to YouTube. But one of the few that does is Facebook. If Facebook were to strike more artist-friendly deals with the record labels and publishers the data cited by Isrealite suggests it could emerge as a potent counterweight to YouTube — the main reason the DEW panelists cited for their (cautious) optimism.

“We’re focusing more on shorter-form content to start,” Zuckerberg said. “There is the type of content that people will produce socially for friends. There’s promotional content that businesses and celebrities and folks will produce. But there’s also a whole class of premium content. The creators need to get paid a good amount in order to support the creation of that content, and we need to be able to support that with a business model, which we’re working on through ads to fund that.”

Much will depend on the development of the revamped Rights Manager. While reportedly modeled on YouTube’s Content ID, few details of how it will work have surfaced to date.

For all of the complaints directed at YouTube over its payouts to artists, Google spent years and (it claims) more than $60 million to develop Content ID, which even YouTube’s critics acknowledge has evolved into a sophisticated and robust piece of engineering.

Facebook certainly has both the financial and engineering resources to throw at the problem. But development still takes time, as will building up the vast library of  reference files Content ID uses to match against posted content.

Without an effective content recognition system even the most favorable license agreements are bound to prove disappointing to rights owners. But if anyone can change the marketplace dynamics of ad-supported streaming it’s Facebook. 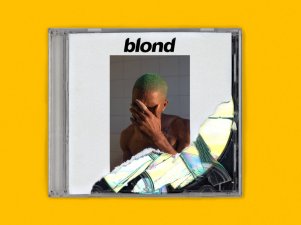 The shoo-in for No. 1 on Billboard’s next album chart is Frank Ocean’s “Blonde,” which has charmed critics and enthralled fans who had waited four years since his last record.

But the release of the album last weekend, through an exclusive deal with Apple, has also roiled the industry, bringing to the surface long-simmering tensions that record companies have with streaming music services, and sometimes even with their own artists. 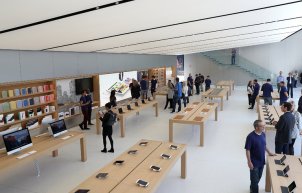 The introduction of the 4-inch iPhone SE earlier this year appeared to hurt revenue and profits as some customers bought that device instead of Apple’s bigger, more expensive models.

“Apple is moving from only iPhones matter to iPhones and services matter,” said Ben Schachter, an analyst with Macquarie Securities, who estimated that nearly one-third of the company’s quarterly profits came from services like App Store purchases, Apple Music subscriptions and the iCloud storage business. Revenue in the segment rose 19 percent to $6 billion. 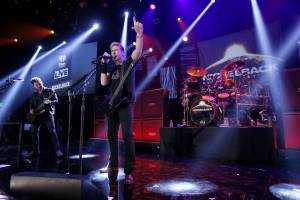 It’s hard to tell whether Apple is simply trolling Spotify with its pitch to the Copyright Royalty Board to adopt a fixed, per-use royalty rate for songwriting rights on streaming services in place or the current revenue-based formula, or whether it’s a serious proposal. But if it’s the latter, the CRB should at least consider the source before adopting it.

END_OF_DOCUMENT_TOKEN_TO_BE_REPLACED

French music-streaming service Deezer is launching to the masses in the U.S. this week, stiffening the competition in an already-crowded market.

Deezer, which had about 6 million subscribers world-wide, already has some users in the U.S., where it has been available only to AT&T Inc.’s Cricket Wireless customers or on Sonos and Bose speaker systems. Starting Tuesday, the 9-year-old service will be available for $10 a month to all U.S. consumers after 30-day free trials.

As artists, record labels, music publishers and managers line up to lobby the US Congress and the European Union, it might seem as if YouTube is the worst thing to happen to the music business since Napster in 1999. The streaming service, the aggrieved parties claim, is causing a massive “value gap” that is unsustainable.

Meanwhile, every major artist has a channel on YouTube and wouldn’t dream of releasing a new record without YouTube involved in its launch.

Source: Is YouTube wrecking the music industry – or putting new artists in the spotlight? | Business | The Guardian

According to a new mid-year report from trusted market monitor BuzzAngle, US single track download sales fell by a whopping 24.2% in the first half of 2016 compared to the same period in 2015.

Source: Download sales have fallen 24% in the past year in the US market – Music Business Worldwide

Piracy was considered the music industry’s big problem. Now, piracy is no longer the hot topic, because licensed services have managed to stop the financial leakage and the industry looks like it has stabilized. These services, and particularly streaming services, have done a great job at understanding the reality of the networked age, in which information travels freely, and have built something that acknowledges that and adds value that certain segments of music consumers are happy to pay for.

The general industry never acknowledged the reality underlying piracy, instead seeing it as an obstacle to be overcome, and after dealing with the worst of piracy it has set its sights on something new: the streaming services. Yes, streaming royalties are low, because the real price of accessing content in the age of networks is zero. These services have figured out clever ways to inflate this price and now they’re under pressure. In our networked age, access to content was never the problem, and many have been suckered into thinking that if this problem can be solved, all financial woes will be behind us. Dead wrong.

"Hungarian speaking Slovaks are a minority. I did feel like my Slovak wasn’t where it was supposed to be. Showing that as a beauty rather than a set-back was important to me with the album."

Mother Tongues: An Interview With @adelkamed

The @SudoSwap tokens are initially non-transferable but can be used to vote on governance decisions.