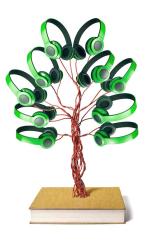 Audible has been making audiobooks more visible to potential customers. It is providing audio clips for Amazon.com as well as Amazon’s book-recommendation site, Goodreads. Amazon also is more prominently featuring Audible’s Whispersync for Voice option, which allows e-book readers to toggle back and forth between an e-book and a discounted audiobook version. (Using this technology, someone could, for example, read a few chapters on the train home and then switch on the audiobook while cooking dinner.)

Whispersync sales were up nearly 60% in 2015 compared with the previous year—a reflection of both its increased visibility and an uptick in available titles to around 100,000, according to Audible.

YouTube Exec Says 25% of All Viewer Hours Are Spent on Music https://rightstech.com/2021/09/youtube-exec-says-25-of-all-viewer-hours-are-spent-on-music/