The global music business offered up two cheers this week for the first signs of life in the recorded music business in nearly a decade. According to International Federation of the Phonographic Industry’s (IFPI) latest global sales report, total recorded music revenue grew 3.2 percent in 2015, to $15.0 billion, the biggest jump since 1998 and the only growth since 2012, when sales ticked up 0.3 percent.

The overall growth came entirely from digital sources, particularly streaming revenue, which jumped 45 percent over 2014, to $2.9 billion, or 19 percent of total revenues. Physical sales continued their decade-long slide, falling another 4.5 percent, buoyed somewhat by the continued renaissance of vinyl.

The strong streaming numbers were evenly distributed, however.

Subscription streaming revenue accounted for $2 billion of the $2.9 billion total, as the total number of paying subscribers reached 68 million, while industry revenue from ad-supported streaming amounted to a mere $634 million, despite more than 900 million listeners worldwide. 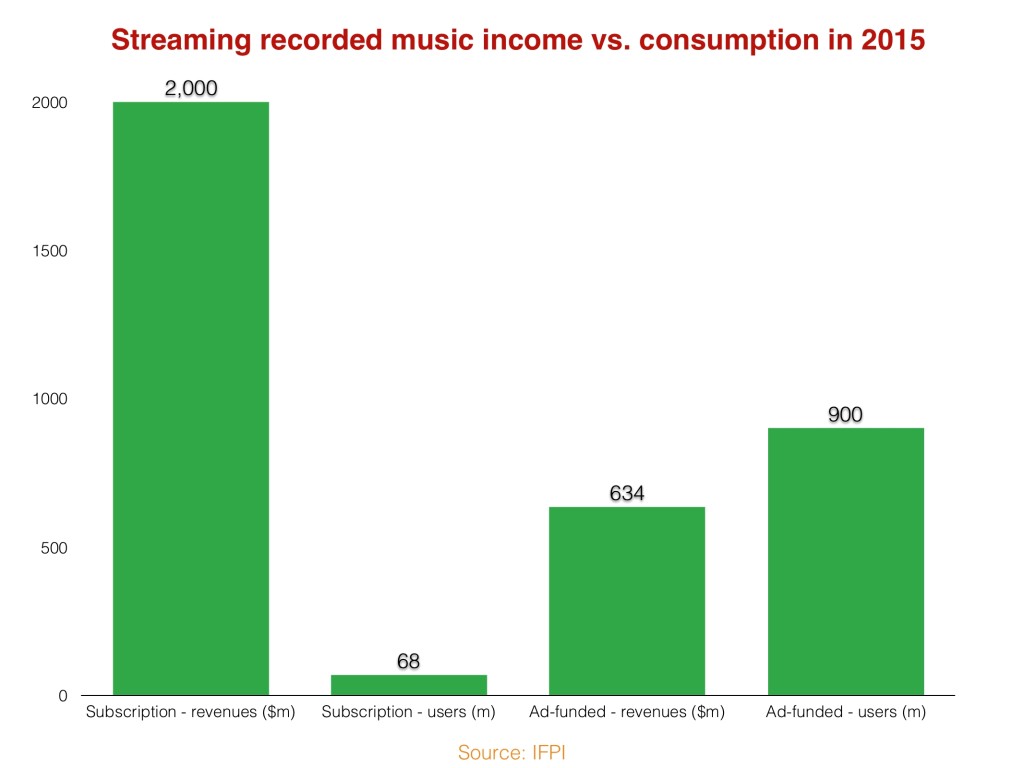 The report referred to the mismatch between consumption and revenue to artists and labels as a “market-distorting value gap,” that must be closed, echoing comments last month by RIAA CEO Cary Sherman.

“We really are in the vanguards of the digital world, but we have got to the stage now where we need the help of policy makers and governments,” Universal Music Group and IFPI CEO Frances Moore said.

“The value gap can really only be solved by legislation,” she added, calling the issue the music industry’s “biggest single priority for 2016.”

Whatever market-distorting effects may be at work, however, were not introduced by the advent of digital streaming. They’re nearly as old as the recorded music industry itself, and are the result of the collective and blanket licensing systems that govern recorded music rights.

Early on it was recognized that it would be impractical, if not impossible, to require services and outlets that used recorded music, whether radio stations or public venues, to negotiate and administer individual licenses for thousands of different recordings and compositions involving millions of individual rights owners.

So the industry, along with Congress and the courts, evolved a patchwork of compulsory and collective licensing regimes by which music users could obtain the rights to entire catalogs of works through a single licensing deal, or by agreeing to a statutory royalty scheme.

The long and convoluted history of that evolution is not relevant here. But the streaming music business is almost entirely governed by collective, compulsory and blanket licensing arrangements covering performance and mechanical rights for musical works and digital performance rights to sound recordings.

Collective licensing, by definition, is not a market mechanism, however. Nor is compulsory licensing. They’re responses to market failure, brought about by the unwieldy structure of the industry itself, with its huge catalogs of works, multiple copyrights and millions of individual rights owners. And in the U.S. they’re ultimately governed (or at least overseen) by a mixture of non-market actors, including Congress, rate courts, the Department of Justice and Article III courts.

The results may now seem unfair to artists and rights owners, given the changes in consumers’ music-listening habits and preferences, but those “market-distorting” mechanisms were in place long before YouTube and Spotify came along.

But what if you didn’t have market failure? What if it were possible, practically and technologically, to license sound recordings and musical compositions individually for use on digital platforms, without resort to opaque-by-design collective mechanisms and blanket licenses?

A growing number of entrepreneurs believe it’s possible, using a combination of “trust-less” mechanisms like blockchain, smart contracts and cryptocurrencies to enable direct licensing of works without the need for mediating, collective structures.

To put it simply, if we could put every song’s [essential metadata] into a global decentralized database owned by all who interact with it, then this would start to solve a multitude of the music and content industry’s problems regarding ownership, payments and transparency…

Blockchains also have another incredibly useful feature: the Smart Contract. Since this database is built on a trustless system, this allows for the creation of machine readable or “smart” contracts (like existing APIs) that can interact with the ledger and create and solve outcomes. For example, when a song is played “x” number of times, then “y” is payed to “z”. Or if a song is 25% owned by “a” and 75% owned by “b”, then a payment will be auto-split along this line and paid out once “c” uses have occurred.

If you were to add basic, Smart Contract-readable information to the MVD set, then you could allow third parties to interact with the entire database requiring less third-party slowdown of payments, and proof of work could be done instantaneously. Scenarios in which you could pay for only the amount of the song that you listen to could be created. Or payments in real time at a micro scale could exist (another great feature of Bitcoin).

Whether those scenarios would result in higher royalties for artists and other rights owners is hard to know at this point. But they would at least be subject to transparent market forces, removing some of the mystery around how those royalties are collected, allocated and paid out today. Paradoxically, “trust-less” mechanisms could lead to more trusted outcomes.

The implications of trust-less systems are not confined to the music industry, however. They have the potential to transform how markets operate across a wide range of rights-based industries.

This July, the inaugural RightsTech Summit, sponsored by Concurrent Media and Digital Media Wire, will bring together leading voices from the worlds of trust-less systems, cloud computing and media rights management to examine how emerging technologies are bringing new levels of transparency, efficiency and dynamism to the business of content licensing.

Click here for more information on speaking, sponsoring and attending the RightsTech Summit.