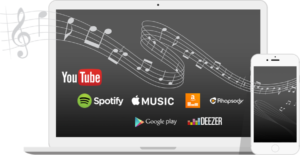 Unless that movie or TV show was created within the last few years, however, the original music synchronization license likely did not address its possible use in YouTube clips. Yet if those clips are being monetized, such as with advertising, the music rights owners are entitled to royalties from that revenue stream — if the owner of the clip can figure out whom to pay and how.

Enter Audiam, the New York-based digital rights management company, which sees an opportunity in the problem. The company, which since last year has been part of Canadian performance rights organization SOCAN, is rolling out a new service to identify sound recordings used in clips, map those sound recordings back to the underlying composition, then identify the owners and ownership “splits” of that composition so they can be paid.

“Production companies and broadcasters create all kinds of clips these days and post them to YouTube, but most of that monetization is happening without synchronization licenses because the original sync license did not anticipate use in YouTube clips,” Audiam co-founder and CEO Jeff Price said. “Sync licenses written today might address that, but if you go back 10, 20, 30 years, clearly the language did not contemplate it. A daytime talk show from 20 years ago may have an artist performing in a segment, and the production company might want to make a clip of that and put it on YouTube. But there’s nothing in the original license to account for that.”

Even where the original sync license did anticipate future commercial exploitation, moreover, the language typically imagined the broadcaster or production company placing its own advertising in whatever channel was being exploited, or licensing the work to a distributor in exchange for a fee from which any royalties due would be calculated. In the case of YouTube clips, a third party — YouTube — is generally placing the ads and there is no negotiated licensing fee from which royalties could be calculated.

Adding to the complexity is the fact that most production companies lack comprehensive data on the sound recordings included in their video libraries.

“We’ll start by scanning their YouTube channel if the have one and identifying every sound recording that appears,” Price said. “We’ll then give them a list of the recordings used in each clip. They can then match that list against their monthly YouTube statements and begin to figure out who needs to get paid.”

Audiam offers the new service on both a soup-to-nuts basis, including handling payments itself, or a la carte, depending on what the production company wants or needs.

“In most cases they just want us to deal with the whole thing,” Price said. “They may handle the sound recordings themselves but most production companies don’t want to have to deal with publisher because it’s so much more complicated.”

As movie and TV studios eagerly look for new ways to “chunk” their libraries to capitalize on new platforms, the problem of unanticipated uses of synchronized music can only mushroom over the next few years, creating more demand for services like Audiam’s.