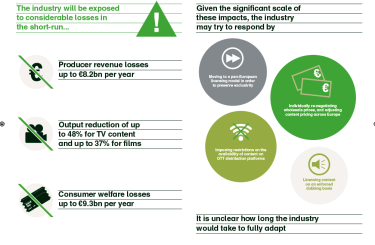 he report calculates that changes to copyright and other initiatives at the EU level could result in substantially lower levels of investment in TV and film content, with consumer welfare losses worth up to €9.3 billion. This, it said, would be a direct result of those consumers losing access to content they currently enjoy, being charged more, or being priced out completely. It further asserts that up to 48% less local TV content in certain genres and 37% less local film production would be produced, with the most marginal/risky content at particular risk of being dropped.

The report was launched with the support of a broad group of sponsors, including film and audiovisual producers, distributors, broadcasters, platforms and film agencies throughout Europe and across the world. The group urges the European Commission to re-think its proposals to erode the territorial exploitation of film and TV content and avoid any proposals or other initiatives that would undermine film and television licensing and financing, including the decision to license on an exclusive territorial basis.