When the developers behind the viral sensation CryptoKitties first turned their virtual cats loose on the blockchain they intended to hew closely to the blockchain ethos of decentralization. Accordingly, the only components of the game actually registered on the Ethereum blockchain are the ownership of the individual cats and the cats’ “digital DNA” that allows them to “breed” with other virtual cats to create new unique CryptoKitties. 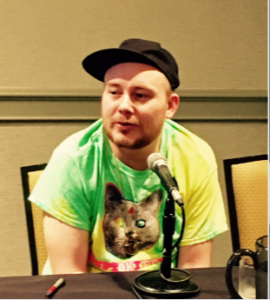 The actually renderings of the kitties — the goofy, cartoonishly colored cat images that have seduced users into the world of crypto and virtual assets — were never added to the chain.

“The code is all open-source. I was really hoping that people would start to do their own renderings of the cats,” CryptoKitties Fat Cat Mack Flavelle told a packed house at the Digital Entertainment World conference this week. “If you wanted to go in and change the code so that your cat rendered with antlers you could do that. It’s your cat.”

Had the code for rendering the images been added to the blockchain it would have become immutable, which would have made modification of the code impossible.

That philosophy carried over to ownership of the intellectual property in the images as well. Part of goal in launching CryptoKitties, Flavelle explained, was to introduce people without a background in blockchain or cryptography to the concept of owning virtual assets, which mean Axiom Zen, the studio behind CryptoKitties, abjuring any interest of its own in the images.

“We we get questions from people asking whether they can make a t-shirt with their cat on it to give to someone, and we’re like, ‘knock yourself out.'” Flavelle said. “If you want to print up 800 t-shirts with your cat and sell them you can. It’s your cat.”

As a proof of concept, that approach has worked spectacularly. CryptoKitty owners have quickly become possessive toward their cat and put great store in its appearance, according to Flavelle. The vast majority of the buying and selling of the cats, along with their “breeding” rights, he said, has been transacted directly between owners, rather than through CryptoKitties’ own marketplace, implying that players indeed view the images of their virtual cats as having real value, independent of the platform they were born on.

The success of CryptoKitties’ decentralized model, however, turns out to have a dark side. According to Flavelle, scammers have seized on the popularity of CryptoKitties to try to defraud people of money by selling them fake kitties. With no fixed code for the images on the blockchain, and no claim of rights in them itself, Axiom Zen has found itself with few technical or legal tools to pursue the scammers.

Flavelle said he is searching for ways to prevent scammers from infiltrating the CryptoKitties ecosystem without compromising its decentralization, but is yet to hit on a workable solution.

“It’s a problem we need to solve,” he said. And a possible warning sign for other entrepreneurs looking to democratize and decentralize the creative process.